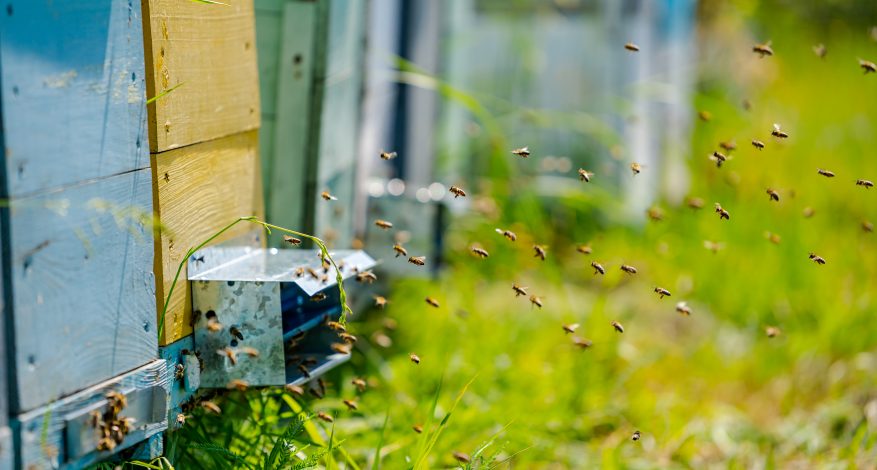 The world of Bees

Many people believe that bees and other pollinating insects, die mainly from pesticides used in agriculture, and this is partly true, but not everyone knows that the main cause of death of these precious creatures is not pesticides, but disappearance of natural habitats and – consequently – the large-scale food shortage that leads these insects to literally die of hunger.

Indeed, it is a fact that the simplification of the landscape currently underway determines insufficient food resources within the flight range of pollinating insects. (Nogué et al., 2016)

In Italy, specifically, the results of the third national report on the Habitats Directive (Genovesi et al. 2014) show that of the 132 habitats of community interest, 67% are in the “unfavorable” conservation status.

The extinction of bees and other pollinating insects

At the moment we don’t have exact data on the extent of what is happening, but science agrees that an unprecedented decline is underway among pollinating insects. To give just one example, one in ten species of bees and butterflies in Europe is at risk of extinction.

Globally, however, a report by the IPBES (UN Intergovernmental Science-Policy Platform on Biodiversity and Ecosystem Services, 2019) indicates that the decline of insects is proceeding eight times faster than that of mammals, birds and reptiles.

In Europe, almost half of the insect species are in serious decline and a third are in danger of extinction, in addition, 9% of Bees species are threatened with extinction and 37% of bees populations are declining dramatically. The decline in the butterfly population, for example, has reached 31% (IUCN, 2015 and Mullin et al. 2010)

What’s going on? Unfortunately, the causes of this disaster are all attributable to human activities as:

Pesticides are therefore, not the only problem, but they are added to many other factors and, currently, the main cause of the decline of pollinators is hunger, a consequence of the loss of natural habitats.

The disappearance of natural habitats

Bees and other pollinating insects are having a difficult time, essentially because there are no more flowers. Flowers that produce the nectar and the pollen they, the pollinators eat.

Our countryside has now become great green deserts. The meadows are continuously mowed and weeded and therefore the multi-year plants do not have time to bloom and, consequently, to make seeds. In this way, within two or three years they disappear and in their place the grass plants take over, which however do not produce nectar or pollen useful for pollinators. In addition to herbicides, continuous fertilization also makes grasses prevail, because it enriches the lawn with nitrogen.

Recreating environments, oases, where pollinators can live and reproduce can certainly help to safeguard them and this is the mission of Savingbees.

The beekeeping oasis of Savingbees

“After starting to breed bees to get some honey, I realized the problem of the disappearance of habitats in nature and I decided to do something. So I thought about creating oases to save these insects. I am an agronomist and I want this to be my contribution to leave to those after me” – tells us Matteo De Simone, founder of Savingbees.

But what exactly is a beekeeping oasis?

The beekeeping oasis of Savingbees a large area created to encourage the natural resettlement of pollinators. To allow the life and reproduction of these insects, in fact, a lot of space is needed, at least one hectare / one and a half hectares for each oasis. And there are many oases, such as refreshment points, spread throughout the territory

It is a habitat with an abundance of food, because we have sown many different flowers, which produce nectar and pollen. An undisturbed place where the ground is no longer plowed to protect the numerous pollinators, who often make their nests underground.

Furthermore, this huge flowery meadow creates a lot of biodiversity because it allows the coexistence of many different species. Not only bees and other pollinators, but also many mammals such as hares and pheasants find protection inside this flowering vegetable forest.

The first beekeeping oasis created by Savingbees., On an area of 13,300 square meters, was born in 2018 and now we are creating the second one, with the wonderful goal of creating at least one oasis a year throughout Italy and maybe in the future also in all Europe.